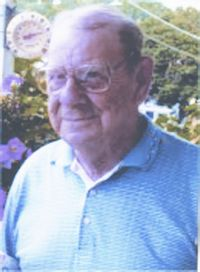 On September 8th I got the word I knew was coming, but didn’t want to hear: Uncle Ed passed away quietly at 8:17 a.m. He was 88 years old and had been battling cancer for several years. I’m grateful that he was well cared for by Gardner VNA Hospice and his family.

Uncle Ed is my father’s oldest brother and is one of Tom Brokaw’s The Greatest Generation. He was 7 years old when the stock market crashed and when he was 16 he dropped out of school to join the Civilian Conservation Corps where he went to Wyoming. I’m not sure of the details, but most boys/men who joined the CCC did so because their families couldn’t afford to feed them. He also spent some time with the Works Progress Administration. His next chapter was determined by the outbreak of World War II. He served in North Africa and Italy. By the way, he was right handed and had a bad right eye. The army didn’t want him because he couldn’t sight a rifle. He taught himself to shoot left handed so he could sight the rifle through his good eye and qualified to join the army. As one who grew up in the shadow of Vietnam, this always amazed me.

Coming home after the war he didn’t have a high school diploma but went immediately to work. He did that until he was 65 when he retired. Like most men of his generation he married, had 2 children, and bought a house. He cared for his parents, joined the VFW, the Gardner Deer Club and Holy Rosary Church.

He was also very good to me. I didn’t travel back for his funeral because of what he did for his country, but what he did for me. When I lived in Boston I used Gardner as a weekend escape. There wasn’t a time that I was in Gardner when he and Aunt Eva didn’t make a place for me at dinner, including Thanksgiving 1980 (the first one where I wasn’t with my family).

With Uncle Ed’s death, the original 7 children are down to 3. The first of them was Uncle Tonto (his name was Andrew but nobody called him that). He died accidentally in 1964 when he was 36.

This picture was taken in 1982. On the bottom are Uncle Norman and my grandmother. The top row (from left to right) are Uncle Joe, Aunt Jeanne, Aunt Freda, my father, and Uncle Ed.

The remaining three are here: Uncle Norman, Aunt Jeanne, and my father.

Note to the remaining three: stay healthy; I don’t want to do this again for a while.