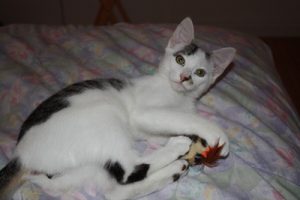 In a previous post I talked about the frustration with dealing with the local Department of Animal Services.

As you can see from the picture, it did have a happy ending. I returned on Thursday, September 1st and was actually able to take him home. Now I can be fully honest. When I went to pick him up and they told me he had to be neutered, they also told me that they would have to test him for feline leukemia. If he came back positive I could “pick another cat.” In other words, they would euthanize him. It wasn’t a great ride home.

When I brought him home we had to come up with a name. When Craig and Alison found him they suggested “Slugger” since he was found on a baseball field. Nancy at first suggested “Patches” due to his coat but I found that too common. My suggestion was “Trouvé” which is French for “Found” but Nancy thought that was too obscure. We liked the idea of a baseball theme, and Nancy suggested “Scully” after now famous Los Angeles Dodgers announcer Vin Scully.

Scully came to us with a large measure of enthusiasm and purring, but also with an upper respiratory infection (ie, a cold). A kitten who sneezes constantly is always a cause for concern, but our veterinarian (Dr. John Hetzler) at Ark Animal Hospital believes it will take care of itself in a matter of days. It’s getting better, but still hard to take at 2AM.

You may ask how Scully is relating to our other cat, Missy. It hasn’t been the easiest of introductions but it seems to be working. Missy is playing the role of the older sister who is not happy about having a little brother, but she’s coping. They may end up as pals, but for the time being Missy is giving Scully a wide berth.