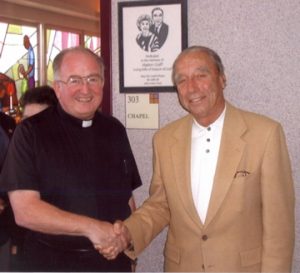 Today my father in law, Al Graff, celebrates his 97th birthday. Here he is seen with Fr. Joe Carroll.

Al’s life celebrates the best of the 20th Century, the best of our immigration policy, and the best of what it means to be Catholic. Do you think I exaggerate? Let me give you some of the high points of Al’s life (so far).

His parents, Paul Graff (1882-1967) and Theresa Sailer Graff (1892-1977) were born in Austria-Hungary, now Austria. They both made their way to the United States in the early 1900s because their parents wanted a better life for them and their descendants. They were successful.

They met in Mandan, North Dakota and married on September 8, 1917. I have a copy of their marriage certificate. According to the laws of North Dakota at the time they had to swear that neither of them had more than 1/8th Negro blood; additionally a doctor found that neither was an “idiot, epileptic, imbecile, feeble minded person, common drunkard, insane person, or person who has been afflicted with hereditary insanity, or afflicted with pulmonary tuberculosis in its advanced stages, or afflicted with any contagious venereal disease.”

Al was born on January 23, 1919. He, his parents and extended family moved to Los Angeles in the early 1920s where he grew up. His cousin (Bob) grew up next door and they lived more as siblings than cousins. As parishioners of Our Lady of Sorrows Church, their pastor (Fr. Ford), recognized Al’s and Bob’s potential. He promised their parents that if they cleaned the church on Saturdays they would have their tuitions paid for at Loyola High School.

They did and it launched Al into Berkeley where he graduated in 1942. During World War II he worked for General Electric in Schenectady, New York. He worked on the jet engine.

They moved from Los Angeles to Rancho Santa Fe, north of San Diego in 1958.

As Al’s career began to unwind he increased his work with his parish, St. James and St. Leo Catholic Church in Solana Beach. This culminated in his ordination as a permanent deacon in 1983. To this day he feels his vocation as a deacon informs this part of his life.

In 1991 he and his best friend, Dr. Dick Wheelock founded a medical clinic at St. Leo’s to treat those who had no other choice for medical care. Dick died in 2014 but the clinic continues.

As we talk with Al, he looks back on his first 97 years with gratitude. His humble early life fills him, not with pride, but with an awareness of his good fortune. His greatest hope is not only that his children do well, but that they continue his ministry of generosity. He hopes that we all live our lives convinced that our gifts ensure that the generations after us prosper better than us.

Because his parents did the same thing. And they did.