Today both Nancy and I received offers for a credit card. It’s not unusual, we shred the equivalent of a small forest of these things each year. Today’s had a funny twist.

These offers succeed to the extent that they convince me to use their card. Suffice it to say they didn’t impress me and I have no desire to do business with them.

You can probably guess my bias from the title of this blog, but I’ve been following 2 current issues with great interest: Proposition 8 and “Don’t Ask, Don’t Tell (the current policy on gays serving in the US military).” It appears to me that equal rights for the gay population is only a matter of time.

People who oppose gay marriage then decided that the best way to combat this was to pass another proposition that amends the state constitution. After all, the constitution can’t be unconstitutional. Backed by big bucks from the Church of Latter Day Saints (the Mormons) and the Knights of Columbus, Proposition 8 passed with 52.3% of the vote. Supporters thought they were done.

They weren’t. On May 26, 2009 the California Supreme Court determined that Proposition 8 was constitutional, but opponents of Prop 8 then went to federal court on January 11, 2009, arguing that Prop 8 is unconstitutional of the Federal Constitution. The plaintiffs, Kristen Kelly and Sandra Steir, filed because they were denied a marriage license. The defendant was Governor Arnold Schwartzenegger by virtue of being governor. In a funny twist, neither Governor Schwartzenegger nor Attorney General Jerry Brown chose to actively defend Prop 8. Instead, the defense of Prop 8 fell to a group called Protect Marriage.

The case came before Judge John Walker. This appeared to be good news for the defendants as he ruled in a previous case that “Gay Olympics” was a copyright violation against the U.S. Olympic Committee and they had to change their name to the Gay Games. He had also been appointed to the bench by President George H.W. Bush. On August 4, 2010 Judge Walker surprised most of us by finding for the plaintiffs, deciding that Proposition 8 is a violation of the 14th Amendment. It’s now on appeal but it’s funny to see that all the people who liked John Walker before his decision have now decided that he’s gay (since he’s never been married) and the decision has no merit. Sounds like sour grapes to me.

Meanwhile, in the military, they are still trying to decide what to do with men and women who are willing to fight and die for our freedom who happen to be gay. When President Clinton was running in 1992 there was pressure from the gay community to remove the ban on gays serving in the military. During the campaign he essentially promised to repeal the ban. Alas, once in office he faced more opposition than he expected and he bowed to that pressure. In 1993 Congress passed a bill called “Don’t Ask, Don’t Tell,” and President Clinton signed it. Simply put, it legislated that nobody is allowed to ask if a service member is gay, and a gay servicemember is required to keep his/her orientation a secret. If (s)he says or does anything to indicate his/her gay orientation, (s)he can be immediately discharged from the service. Since passage 14,000 servicemembers have been discharged for being gay. In the gay community, DADT (Don’t Ask, Don’t Tell) has been seen as open season on the gay population.

With the election of Barack Obama in 2008, the debate began again. As I write this the bill to repeal DADT is moving through Congress. The House has already voted to repeal it, and it’s stuck in the Senate. It’s interesting to see what’s being said. My most interesting person is Senator John McCain. At first blush you’d think he’d be the “go to” guy on this issue given his background. He graduated from the U.S. Naval Academy and was a pilot during Vietnam. He was shot down and spent 5 1/2 years as a POW in North Vietnam. If ever there was a case where a group needed unit cohesion, it would be here. He has opposed DADT and it was easy to do this when the the leaders of the military opposed it. In fact, in 1986 he said this: “The day that the leadership of the military comes to me and says, ‘Senator, we ought to change the policy,’ then I think we ought to consider seriously changing it.”

He probably never expected this to happen, but it has. On December 2, 2010 the Chairman of the Joint Chiefs of Staff, Admiral Michael Mullen said this:

My personal views on this issue remain unchanged. I am convinced that repeal of the law governing Don’t Ask, Don’t Tell is the right thing to do. Back in February, when I testified to this sentiment, I also said that I believed the men and women of the Armed Forces could accommodate such a change. But I did not know it for a fact. Now, I do.
And so what was my personal opinion is now my professional opinion. Repeal of the law will not prove an unacceptable risk to military readiness. Unit cohesion will not suffer if our units are well-led. And families will not encourage their loved ones to leave the service in droves.

He made this statement against the backdrop of a study released by the Pentagon on November 30, 2010. The survey reviewed the beliefs of 115,000 active duty members of the military and 44,200 military spouses. About 70% of them indicated they had no problem with the idea of allowing gays to serve. Those in uniform lead those out of uniform: only 58% of all Americans favor this. Interestingly, the majority of both groups favor repealing DADT. And the 115,000? Well, 69% report that they have already worked with a gay servicemember and 92% of them said it had a positive impact or no impact on their working relationship.

So here we are: the President, the Secretary of Defense, and the Chairman of the Joint Chiefs of Staff all support the repeal of DADT. And Senator McCain? He has abandoned his previous statement and now says: “This was a political promise made by an inexperienced president or candidate for presidency.” At no point does he admit he abandoned his earlier promise. Then again, he’s the guy who ran with Sarah Palin.

Of the people who still oppose DADT, they all pretty much respect Barry Goldwater who said this in 1993:

After more than 50 years in the military and politics, I am still amazed to see how upset people can get over nothing. Lifting the ban on gays in the military isn’t exactly nothing – but it’s pretty damned close

Everyone knows that gays have served honorably in the military since at least the time of Julius Caesar. They’ll still be serving long after we’re all dead and buried. That should not surprise anyone.

But most Americans should be shocked to know that while the country’s economy is going down the tubes, the military has wasted half a billion dollars over the past decade chasing down gays and running them out of the armed services.

It’s no great secret that military studies have proved again and again that there’s no valid reason for keeping the ban on gays. Some thought gays were crazy, but then found that wasn’t true. Then they decided that gays were a security risk, but again the Department of Defense decided that wasn’t so. In fact, one study by the Navy in 1956 that was never made public found gays to be good security risks. Even Larry Korb, President Reagan’s man in charge of implementing the Pentagon ban on gays, now admits that it was a dumb idea. No wonder my friend Dick Cheney, Secretary of Defense under President Bush, called it “a bit of an old chestnut”

When the facts lead to one conclusion, I say it’s time to act – not to hide. The country and the military know that eventually the ban will be lifted. The only remaining questions are how much muck we will all be dragged through, and how many brave Americans like Tom Paniccia and Margarethe Cammermeyer will have their lives and careers destroyed in a senseless attempt to stall the inevitable.

Some in congress think I’m wrong. They say we absolutely must continue to discriminate, or all hell will break loose. Who knows? (they say) perhaps our soldiers may even take up arms against each other.

Years ago I was a lieutenant in charge of an all-black unit. Military leaders at the time believed that blacks lacked leadership potential, period. That seems ridiculous now – as it should. Now each and every man and woman who serves this nation takes orders from a black man, our own Gen. Colin Powell.

Nobody thought that blacks or women could ever be integrated into the military. Many thought that an all-volunteer force could never protect our national interest. Well, it has and despite those who feared the worst – I among them – we are still the best and will continue to be.

The point is that decisions are always a lot easier to make in hindsight, but we seldom have that luxury. That’s why the future of our country depends on leadership, and that’s what we need now.

I served in the armed forces. I have flown more than 150 of the best fighter planes and bombers this country manufactured. I founded the Arizona National Guard. I chaired the Senate Armed Services Committee. And I think it’s high time to pull the curtains on this charade of policy.

What should undermine our readiness would be a compromise policy, like “don’t ask, don’t tell.” That compromise doesn’t deal with the issue, it tries to hide it.

We have wasted enough precious time, money and talent trying to persecute and pretend. It’s time to stop burying our heads in the sand and denying reality for the sake of politics. It’s time to deal with this straight on and be done with it. It’s time to get on with more important business.

The conservative movement, to which I subscribe, has as one of its basic tenets the belief that government should stay out of people’s private lives. Government governs best when it governs least, and stays out of the impossible task of legislating morality. But legislating someone’s version of morality is exactly what we do by perpetuating discrimination against gays.

When you get down to it no American able to serve should be allowed – much less given an excuse – to not serve his or her country. We need all our talent.

If I were in the Senate today I would rise on the Senate floor in support of our commander in chief. He may be a Democrat, but he happens to be right on this question.

Thank you Senator Goldwater (or, as your license plate said, AuH20).

Oh, and by the say, my favorite quotation from the report is this:

As one special operations force warfighter told us, ‘We have a gay guy (in the unit). He’s big, he’s mean, and he kills lots of bad guys. No one cared that he was gay,’

Nowhere have I found a quotation that said: “I served with a homosexual and it hurt us as a unit.” Let me know if you have. 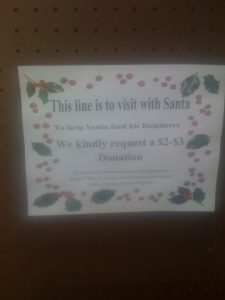 On Saturday Nancy and I went down to Balboa Park for the annual celebration of December Nights. While there we saw this sign. It’s a Christmas tradition that young children sit on Santa’s lap, but most of us don’t remember paying for this joy. But then again, I didn’t spend my Santa years in San Diego.

It’s a new, cynical, and expensive world. At least here in San Diego